Looking for a  “One Man Band”, solo performer or duet for your wedding, private party, or intimate corporate event? We offer a great selection of  versatile and experienced professional musicians.  Choose from our specialist session vocalists and musicians who have compact setups with PA systems who can cover a vast array of music styles for any occasion! 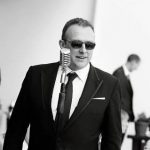 Sean is one of Ireland’s most sought after solo vocalists in his genre, and with his silky smooth voice and effortless style, he has countless appearances on national radio and TV to his credit including “The Voice of Ireland” and “The Late Late Show Christmas Special” 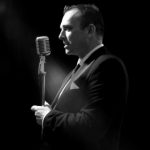 Sinatra, Dean Martin, Nat King Cole, Louis Armstrong, Bobby Darin all feature on his setlist, along with contemporary artists such as Michael Bublé and Gregory Porter. Mixing these with a selection of smooth, jazz versions of some 70s/80s/90s classics, Sean creates a perfectly unintrusive performance every time! 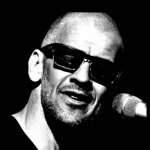 Creating the right piano bar atmosphere is what Fergus does and loves.  Fergus  is guaranteed to impress and captivate audiences with his vocal range and piano/keyboard playing ability. 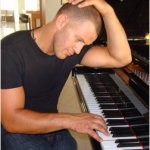 The genres of music covered are extensive, and being a ‘play by ear’ musician means that a great vibe is guaranteed when Fergus performs! 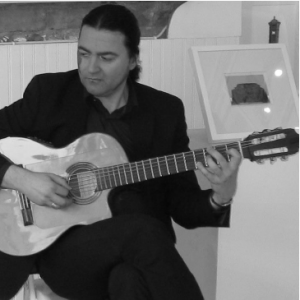 Spanish Guitarist Mario creates an ideal atmosphere for both formal and more casual, fun events. With 20 years of experience, he has performed for numerous corporate events, weddings and private parties around Ireland and Europe.

Mario plays top quality entertainment for your drinks reception, a slightly different Jazz sound also available as a quartet, trio or duo with guitar, violin, saxophone, flute or double bass.  With a combination of Latin and Swing sound this highly professional and experienced jazz musician will thrill your guests with his combination of wonderful music and a large repertoire of popular songs, both jazz-latin originals and adaptations.

A tremendously versatile guitarist and composer, Mario is equally at home performing music from the guitar repertoire, including classical and Brazilian music, Jazz, Gypsy Jazz, Spanish and Latin tunes.  Mario brings a touch of class to any event! 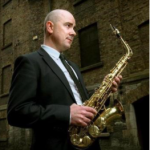 As one of the most sought-after saxophonists and clarinettists in Dublin, Mark has performed in many of Ireland’s leading concert halls and venues. He has worked regularly with the RTE Concert Orchestra, Irish Film Orchestra , BBC Ulster Orchestra and has performed on many Recordings, Concert and TV programmes.

A particular passion of Mark’s is Big Band and Jazz music , he is the band leader and founder of well known Dublin Jazz Orchestra – The Hot House Big Band and he also occupies the Lead Alto position with many of Ireland’s Big Bands . 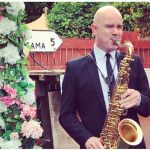 lude the Paul Dunlea , Dave Gold , Jim Doherty and Brian Byrne Big Bands. Mark is also a member of Dublin band ‘Aja’ and he is a busy performer on the Irish wedding and corporate scene.

Your Wedding –  Mark’s versatile and soulful saxophone playing will add that extra touch of magic to help create the perfect atmosphere for you and your guests on your Special Day.

Drinks Reception – Solo Saxophone  Performing solo with professional quality backing tracks to set a warm and relaxing ambience for your guests as they arrive at your drinks reception. 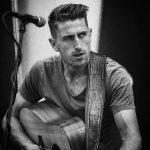 “Jamie brings a feel good folk vibe to his performances with his comforting and warm quality voice”. Totally at ease on stage and a great performer, Jamie’s live performance is an entertaining master-class at its finest” – Dublin Concerts

Jamie is a singer/songwriter from Dublin currently beginning to perform across the city and internationally.

He makes his presence felt on stage by creating an energetic, original, light-hearted folk/rock sound. Jamie’s debut EP release perfectly encapsulates the powerful, energetic folk sound that he is known for. This energy and power is best presented by his lead single ‘Shirts & Ties’. 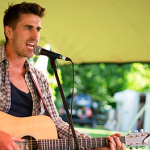 Eugene Ginty is a vastly exp 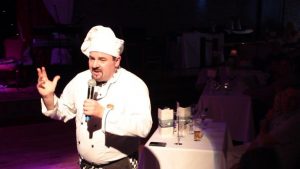 erienced opera singer (tenor) and has performed all over the world singing more than 80 operatic roles. His repertoire now includes not only operatic arias, but also musicals, swing, pop and Irish.

As Gino the Singing Chef, Eugene makes his entrance towards the end of the meal (usually at dessert time) and will be called into the room by the hotel manager to receive a parting gift of a bottle of champagne… Gino is returning home to Italy to get married for the 3rd time… but is persuaded to sing a song before he leaves… astounded guests demand an encore leading to 25/30 minutes of stunning singing, comedy and even audience participation!

Eugene will work carefully with the event organisers to ensure that the performance is both unique and personal, and ‘targets’ can be singled out in advance for some ‘special treatment’! 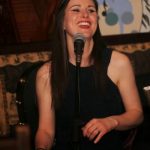 Their music is laced with beautiful harmonies from simple acoustic sets to tracked up tempo music,  and can add other talented musicians if the occasion needs an even bigger sound! The flexibility, guidance and professionalism they provide to all of their clients is core to the service that wedding couples and clients enjoy.

Voici’s covers include all the favourites from  Fleetwood Mac to Bruno Mars, Bee Gees to Michael Jackson, AC/DC to The Carpenters – their range of music is unmatched and allows them to play the crowd and change the tempo if ever needed!

Jim Quinn, or as he is professionally known throughout the music circuit in Ireland and Europe as “Gentleman Jim”, plays the acoustic guitar and sings in a style that holds back none of the energy and passion that he feels an audience deserves. Jim spent four years touring Europe and also toured World-Wide with one of the top contemporary folk bands of the nineties, “Boru”.  Never stuck for words or a song, Jim always sends the crowd home cheering for more.   Not the least of Jim’s talents through is his wonderful ability to put the people at ease and create a comfortable and enjoyable atmosphere for them. 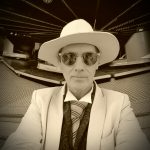 What Maurice Culligan brings to a wedding or corporate event, is an intimate gathering around his piano after the band have gone home, and he rocks the night away with a sing-song!  He has the crowd singing everything from Your Song to Patricia the Stripper…. Maurice entertains well into the early hours of the morning….and will make it a night to remember!

Want to get your customers to stay longer – then “Entertain Them” !  Maurice has performed for over 20 years in many Hotel’s, Bar’s and Rest 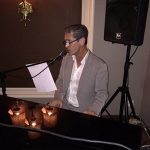 aurants in Ireland and around the Globe. He is well known as the “Piano Man” at the Radisson Hotel in Galway and during the Race week festival regularly commands huge crowds in sing songs around his Piano. 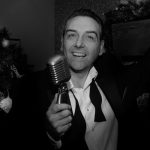 Adrian Cullen is a solo performer specialising in Dean Martin’s Rat Pack era – and has been performing from a young age in his home town of Sligo. It was through his deep admiration for the Late, Great Dean Martin and the music of swing and jazz, that sparked the concept of The Dean Martin Tribute Show.

With residencies in Dublin, Donegal and Sligo, working to original quality backing tracks, Adrian continues to perform the hits such as, Everybody Loves Somebody Sometime, That’s Amore and Little ‘Ole Wine Drinker Me, together with those rarities to please the truly dedicated fans of Dean Martin and The Rat Pack.

Take a trip back in time to an era of Cool and Sophistication and share this wonderful, timeless music.  Perfect for  Weddings, Corporate Events and Private parties! 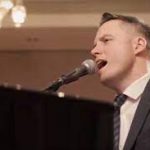 Keith is a multi award-winning musician & piano vocalist based in Dublin, available to hire for weddings, parties, corporate events, drinks receptions, hotel & restaurant entertainment.  He is completely self-contained with his own transport and equipment; Portable Grand Piano, Microphone & P.A. system. He has been playing piano for over 30 years and performing live for more than 20 years at a professional level.

Keith completed three third-level courses in Music and Music Performance – two based in Dublin and the other in Cork city. Having been a member of various cover bands, tribute bands and wedding bands, he has played in a variety of venues from the local pub right up to some of Ireland’s biggest theatres, gaining experience of playing to crowds of all sizes. He prefers to perform solo gigs as that’s where his passion lies!

Given his musical knowledge and experience, Keith has the passion and talent to play many styles of music for any occasion: 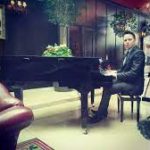 – Piano music for during the meal of a wedding reception

– BBQ music for the day after a wedding

Keith won the award of “Wedding Musician of the Year ” several times with Weddings Online, voted by past bride and grooms and winner selected by a panel of industry experts. 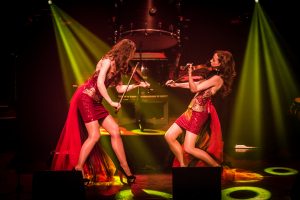 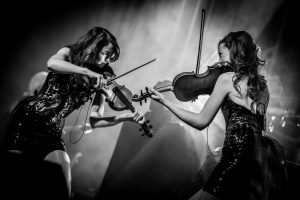 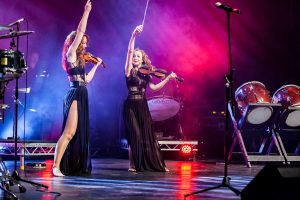 “Sephira” – The Irish Rock Violinists (sisters Ruth & Joyce O’Leary based in Co. Limerick), are undeniably one of the world’s most exciting musical talents having appeared with Andrea Bocelli, Kanye West, Michael Buble and Enya. This was all followed by a two-year engagement as dancing violinists for the show, “Celtic Thunder”. Sephira have appeared extensively on PBS television in the US and have entertained luminaries across the globe including: Prince, Albert of M 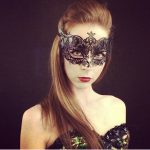 onaco, Muhammad Ali, Priscilla Presley and none other than their biggest fan, the late Larry Hagman. After a period of being musical ambassadors for Ireland in the US, Sephira were invited to give a dazzling performance at the NY pre-premiere of the Bond movie, Skyfall.

The show begins in complete darkness – blackout lighting. Sephira’s movie trailer-like intro is shown on a large screen. Sephira appear on stage in stunning couture gowns opening with one of their signature epic tracks. This setlist is carefully crafted and lasts for 7-10mins.

Male tribal percussionists can be added for dramatic effect at an additional cost. 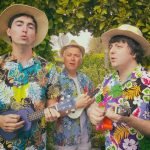 UKEBOX are an impeccable, talented and professional Ukelele Duo or Trio who play and harmonise like nobody else. Comprising of three of Ireland’s most renowned musicians they guarantee to bring fun and sunshine to your wedding or party.

Dressed in Hawaiian attire or suited up,Ukebox are perfect to add something special to your big day and have your guests in awe! Their versality and vast setlist can be tailored to suit Ceremony Music or a more upbeat set for Drinks Receptions or Corporate Events. They can also go from table to table entertaining your guests and take requests!