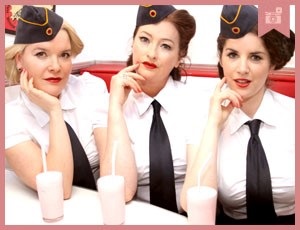 Singing the Billboard hits from the Golden Eras of Swing and Jive, the Bugle Babes are a 1940’s style close-harmony trio, inspired by The Andrews Sisters and the Hollywood stars of stage and screen. Whether adorned in retro military uniforms of soft satin dresses, the Bugle Babes style is pure Vintage from their Victory Rolls all the way down to the toes of their seamed stockings!

Formed by Derby Browne in 2007, The Bugle Babes have performed all over Ireland from The National Concert Hall to the Cork Opera House, and on Radio and Television; including The Late Late Show, Ryan Turbidy, and to “Knock ’em dead!” reviews at the American Embassy on Veterans Day! The Bugle Babes are a regular act upon the stage of The Sugar Club in Dublin!

To book The Bugle Babes for your event or to talk to us about your event requirements, either submit the enquiry form, email us:  info@carolandassociates.com or call us on 01 235 2570.