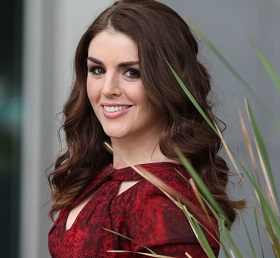 TV & Radio Broadcaster, Síle Seoige is a regular Host at awards events and ceremonies throughout the year.

Síle is a popular choice to MC events and Chair debates and is known as a true professional with a friendly, down to earth style.

Fluent in Irish, Síle has  developed a wealth of experience over the past 17 years in the business.

A native of Spiddal in Connemara Co. Galway and the youngest of four children, she has worked on a variety of successful and well-received projects for RTÉ, TV3 and TG4 including Entertainment, Daytime, Lifestyle, Factual, Young Peoples, Sports, Comedy, Weather and News and Current Affairs programming.

Síle was part of RTÉ’s daytime family having joined her sister Gráinne in 2008 on the stations then flagship late-afternoon daytime show, Seoige; and she also presented The Afternoon Show on numerous occasions.

For two years she travelled across the country reporting and presenting Pobal, a weekly regional and community affairs programme on RTÉ.

A natural people person, Síle co-presented RTÉ’s live coverage of the St. Patrick’s Day Parade celebrations for three consecutive years, including fronting the Festival Highlights programme in 2007 and again in 2011.

She was guest presenter on RTÉ One’s travel programme No Frontiers many times.

In January 2015 she presented an hour long primetime show on TV3 called ‘Songs Of Inspiration’ celebrating the best in gospel and spiritual music.

In 2016 Síle presented live TV coverage of the first day of the 32nd Dáil from Leinster House for Oireachtas TV which included interviews with the new members.

Síle has worked on a number of radio shows down through the years, including a stint on RTÉ Radio 1’s Today with Pat Kenny, presenting on pop up radio station ‘Walk in my shoes radio’ dedicated to promoting positive mental health and Sunshine106.8. She also spent over three years fronting her own two hour live talk show on Saturdays from 12-2pm on Newstalk 106-108 called Shenanigans with Sile. The show was a great success and she continued to grow listeners year on year.

Síle is currently working with the HSE on their ‘Little Things’ radio campaign, facilitating conversations to promote good mental health, broadcasting across 15 stations in Ireland at regular intervals.  Their campaign has been much talked about and it recently won ‘Most Effective Radio Campaign’ at The Love Radio Awards in the Mansion House in Dublin.

Síle continues to gain respect and praise as a voice over artist as well for her warmth and versatility; narrating the likes of the lifestyle series Feargal Quinn’s Retail Therapy and Design Doctors alongside many documentary strands and commercials.

Recently she’s added another string to her bow by becoming a certified yoga teacher and is now running weekly classes in chant and meditation.

She also supports various charities and is proud to be an Ambassador for Make-A-Wish Ireland and Tour De Force cycle.

Some of Síle’s past clients include Redbull, Microsoft, Construction Industry Federation, Checkout Magazine, Musgraves and ALDI to name a few!

To book Síle Seoige to MC/Host your event, or to talk to us about your corporate event requirements, either submit the enquiry form, email us:  info@carolandassociates.com or call us on 01 235 2570.