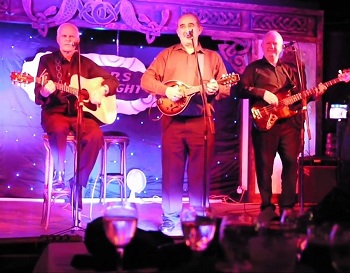 Shandy Folk are an Irish Folk/Ballad group featuring Brendan Savage who incorporates his story telling/comedy in the their riveting performances.

Brendan has been a regular guest on the Funny Friday Show on Liveline with Joe Duffy for nearly 20 years.

This Irish Traditional Band  have been playing around Ireland, England & Wales for over 30  years. Playing a variety of Instruments, their programme consists mainly of Irish Ballads, Folk and Country.

They perform numbers like Irish Molly, Carrickfergus, Wild Rover and many more well known favourites.  Combined the group have many years of experience. One member, having appeared in the well known Jurys Hotel Irish Cabaret has toured U.S.A, Symphony Hall, Five tours of America, Australia and New Zealand and spent two summer seasons in one of Ireland’s most famous Irish cabaret pubs, Johnny Fox’s.

They are currently one of the resident bands in Taylor’s Three Rock doing the Irish Shows.

They also cover music from the 60’s and popular Country numbers.


To book Shandy Folk for your  event or to talk to us about your event requirements, either submit the enquiry form, email us: info@carolandassociates.com or call us on 01 235 2570.