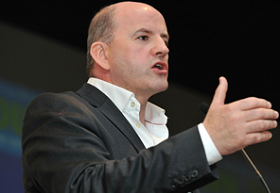 Sean Gallagher is a highly engaging and inspirational speaker. Determination, self-belief and a positive mental attitude are just some of the key topics he speaks passionately about. His own life story is a testament to his personal commitment to these very principles.

Sean ran as an Independent Candidate in the 2011 Irish Presidential Election. Having built a team from scratch, consisting mostly of volunteers, he empowered them to take on the might of the political establishment. He chose not to erect a single poster, chose against spending money on the customary campaign bus and developed instead the most significant social media strategy of any candidate. From a rank outsider initially, his meteoric rise led him to top the opinion polls just 3 days before the election. While ultimately coming second, he is credited with having run one of the most dynamic, innovative and effective campaigns in Irish Political history.

The breath of Sean’s knowledge is derived largely from the diversity of the careers he has been involved in, including Agriculture, Youth Work, Politics and Business.  Sean’s passion for supporting and mentoring emerging entrepreneurs led him to become a popular investor on the successful TV series “Dragons Den”. A former Assistant CEO with the County Enterprise Boards, Sean also holds an MBA.

He was co-founder and CEO, for almost a decade, of Ireland’s largest home technology company, Smarthomes. At its height the business employed 70 full time staff and won numerous awards for its innovation and pioneering work including; the “Rising Star Award” from Deloitte, “Innovator of the Year Award” from the Small Firms Association and the “Winner of the All Ireland Seedcorn Competition” from IntertradeIreland. Sean, himself, was a finalist in the Ernst and Young Entrepreneur of the Year Awards in 2006.

In the recent past he was Chairman of Drogheda Port Company, a Board member of the North South Trade Body, IntertradeIreland, and a member of the newly constituted board of FAS. He is currently a member of the board of Young Social Innovators (YSI).

As part of his recovery from an accident in his early twenties, he became a qualified Fitness Instructor, Massage Therapist and went on to successfully win Black Belts in both the sports of Judo and Karate. In 2009, at the age of 47, Sean won the boxing reality TV programme “Charity Lords of the Ring” helping to raise much needs funds for the National Council for the Blind.

No stranger to overcoming challenges himself, Sean has been visually impaired since birth, but has never allowed his limitations to define him. The inspiring words of his primary school teacher “If you can dream it, you can become it” became and remains his life’s mantra.
If you are looking for someone to motivate, inspire and entertain your audience, Sean is an ideal speaker for your conference, seminar or launch. He can cover subjects such as success principles, enterprise, motivation, overcoming adversity, leadership, customer service and Sales. He understands what it takes to develop clear goals, how to stay positive and focused, how to address challenges, overcome adversity and develop the right attitude to achieve Success.

To bookSean Gallagher for your event or to talk to us about your corporate event requirements, either submit the enquiry form, email us:  info@carolandassociates.com or call us on 01 235 2570.