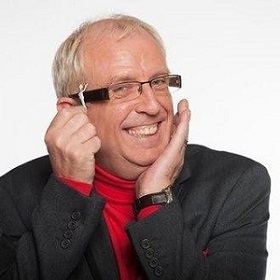 Rory Cowan is best known for portraying Rory Brown in hit BBC comedy Mrs Brown’s Boys from 2001 to 2017, and for starring in the Mrs. Brown’s Boys D’Movie in 2014. Cowan worked with Brendan O’Carroll since 1992.

VIP Style Award for Most Stylish Man, Rory’s mother wanted him to go into banking, but he deliberately failed his maths exam in order to avoid this.

He then worked in a record shop owned by EMI, eventually becoming marketing manager of the holding company in Ireland. While there, he managed Christy Dignam and the drag act Mr Pussy, and first saw Brendan O’Carroll in performance.

After being made redundant in 1992, he was asked to book an act for a venue that would bring in similar crowds to those that had accompanied Mr Pussy and Dignam; and suggested O’Carroll. As a result of this, he became O’Carroll’s publicist, and has worked alongside him well into the 2010s.

Soon afterwards, O’Carroll developed the Mrs Brown routine, creating the character of Rory Brown specifically for Cowan, although at first, Cowan did not take on the role as he was simply “the logistics man” who organised shows and bookings. The character of Rory Brown originally appeared in the radio slots, and was originally played on stage by another actor who resigned at short notice.

As a result, Rory  despite never having acted in front of an audience before, was asked to take on the role by O’Carroll, and his deliberately camp performance quickly became the definitive portrayal.  In 2016, Rory and Deirdre O’Kane were signed up to the Irish version of Gogglebox, screened by TV3.

To book Rory Cowan for your event or to talk to us about your event requirements, either submit the enquiry form, email us: info@carolandassociates.com or call us on 01 235 2570.