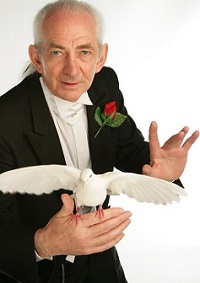 Since he began his career with a concert tour with Foster and Allen in the spring of 1984 Pat Fallon’s versatility as a performer has taken him to many different areas of the entertainment world.

In addition to appearing or touring both at home and abroad with many of the stars of Irish show business Pat has worked as a magical advisor and consultant for Stage, Screen and Television. He has also performed for product launches, promotions and official openings for retail outlets and night-clubs. You name the situation he’s worked it!

Magical performances can take all forms from children’s shows to large stage productions and all points in between. Pat Fallon has entertained outdoors for festivals and garden fetes, close up and walk around magic for product launches and corporate events and in cabaret at most of the leading venues throughout the country.

Pat is a member of the prestigious Inner Magic Circle in London and is their official representative in Ireland.  He is also the only inner magic circle member with Gold Star in Ireland-This is the highest award the Magic Circle can offer a magician.