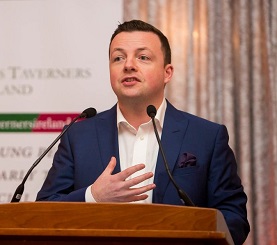 It’s been our delight to work with Oliver for many years!  One of Ireland’s most sought after comedians and voice actors, Oliver Callan is an award-winning comedy satirist , who has an excellent track record at entertaining both large crowds and smaller intimate events.

Not just an award-wining satirist 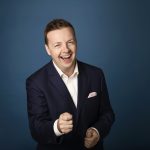 While Oliver shot to fame through his repertoire of impersonations, ranging from Barack Obama to Leo Varadkar, Boris Johnson, Trump, and an array of public figures, he is much more than a comedian.

He is also a regular columnist in The Irish Sun and The Irish Times and a busy voiceover artist who has starred as dozens of characters in the hit Nickelodeon series Day Henry Met, as well as in hundreds of commercials.

He is the creator of Callan’s Kicks, a hit weekly radio satire show with TV specials, comedy albums and DVDs which have gone platinum, and his live comedy shows have sold out at the Bord Gáis Energy Theatre, the Olympia Theatre and Cork Opera House, winning a National PPI Award along the way.

It is also a hit podcast, with one million listeners downloading the show in Spring 2019 alone and he a staple feature on Irish television including the world’s longest running chat show, The Late Late Show.

Oliver is best known for his sharp parodies of national and international political, social and entertainment figures. His acerbic wit and talent for mimicry has made him a household name as well as a respected commentator and writer.

To book Oliver Callan  submit the enquiry form, mail: info@carolandassociates.com or call us on 01 235 2570.