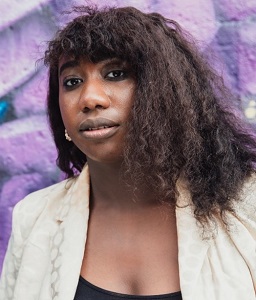 Ola Majekodunmi is a broadcaster, freelance journalist, Gaeilgeoir, public speaker, creator, co-founder of Beyond Representation and Board of Directors member on Foras na Gaeilge, Dublin Film Festival and a member of Galway Film Centre’s National Talent Academy Steering Committee.  She found a passion for the Irish language at a young age as she went to all-Irish schools.  She was also a contributor to the popular Motherfoclóir podcast, which explores different topics regarding the Irish language in a fun, witty way. You may have also seen Ola on TV from time to time on TG4, RTÉ and BBC contributing to different shows.

In 2018, Ola directed and produced the viral video- ‘What Does “Irishness” Look Like?’ which was screened at the Belfast Feminist Festival, Belfast Film Festival and Rathmullan Film Festival.  In 2019, she co-founded an initiative with her cousin and friend to create a platform to celebrate women of colour’s achievements in Arts, Media, and Business.

She was nominated for the SMEDIAS for the category ‘Iriseoireacht trí Ghaeilge’ in 2018 and 2019. She was also nominated for the SAAI Awards for the category ‘Feachtas Bliain Na Gaeilge’ in 2018. She was nominated for ‘Réalta Óg na Bliana’ (Young Star of the Year) for Gradaim Cumarsáide (The Media Awards) at Oireachtas na Gaeilge in 2019. She also won the Amdalah Africa Foundation Award in 2019 for her achievements and contribution to inclusion and community development in Ireland. She was appointed Dublin Culture Night ambassador last September 2021.

To book Ola Majekodunmi to host or MC your corporate event or to talk to us about your event requirements, either submit the enquiry form, email us: info@carolandassociates.com or call us on 01 235 2570.