Nigel Owens is a Welsh International, World Cup and Heineken Cup rugby union referee. Born and raised in a small village in South Wales he was appointed as an international referee in 2005, and that year officiated his first international between Ireland and Japan in Osaka.

Nigel is an extremely popular and entertaining after-dinner speaker. His warmth and humour (he worked as a comedian in South Wales in the 80s) shine through his story, which is brimming

with anecdotes about matches he has refereed and players he has met along the way: from Gavin Henson’s first match, to on-pitch altercations with Austin Healey, Lawrence Dallaglio’s intimidation tactics, coping with live televised matches, and needing a police escort from the grounds in Auch, France, to his thoughts on the Heineken Cup quarter final between Harlequins and Leinster on 12th April 2009, which was to rock the foundations of rugby worldwide when Harlequins wing Tom Williams bit on a blood capsule and faked injury.

He was the only Welsh referee at the 2007 and 2011 Rugby World Cups and is regarded as the first openly gay man to referee at the highest level. He made his World Cup debut in Lyon, France in September 2007 refereeing the Argentina vs. Georgia game.

He is only one of two referees ever to be appointed to referee two consecutive Heineken Cup finals: Munster v Toulouse at the Millennium Stadium in 2008 and Leicester Tigers v Leinster at Murrayfield in 2009. 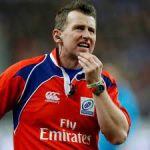 In 2007, Owens was named ‘Gay Sports Personality of the Year‘ by gay rights group Stonewall at their annual awards ceremony in London.

In 2011, Nigel was made a member of the Gorsedd of Bards at their National Eisteddfod in Wrexham.

Owens was appointed as the referee for the 2015 Rugby World Cup Final between New Zealand and Australia at Twickenham.

To book Nigel Owens for your event or to talk to us about your event requirements, either submit the enquiry form, email us: info@carolandassociates.com or call us on 01 235 2570.