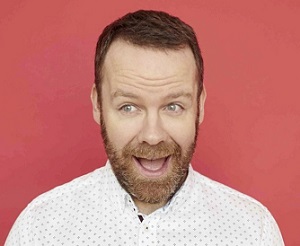 On the corporate entertainment circuit, Neil Delamere is highly sought-after for hosting corporate award dinners as much as he is in-demand for presenting after dinner comedy, and for a wide range of events and functions.

His razor-sharp wit, coupled with a natural ability to ad-lib and think quickly on his feet, makes Dublin-based Neil ideally suited to entertain a diverse range of audiences. He has worked with all sectors of society and business from banking to insurance, pharmaceutical to retail and from sport to engineering.

Neil Delamere has been described as a ‘master of stand-up’ by the Scotsman and a ‘wryly brilliant live performer’ by the Sunday Times. Best known for quick-witted appearances on myriad panel shows and his hilarious live stand-up tours, Neil is a regular contributor for BBC Radio 4 on The News Quiz, The Now Show and The Unbelievable Truth as well as Fighting Talk on BBC Radio 5 Live. He is one of the top acts working in the Irish comedy scene today, having presented Neil Delamere’s Just For Laughs, Eureka! The Big Bang Query and Republic of Telly for RTÉ.

Neil has also appeared on Richard Osman’s House of Games and The Michael McIntyre Show on BBC as well as The World Stands Up and Live At The Comedy Store on Comedy Central. He’s been a permanent panellist on BBC NI’s The Blame Game since the show’s inception.

In addition to writing and presenting award-winning TV documentaries on the Vikings and St. Patrick, Neil recently starred in the BBC mockumentary Soft Border Patrol, with his sketches subsequently garnering in excess of 3 million views online. He’s performed all over the world including at the Edinburgh, Montreal and Melbourne festivals where his shows have amassed multiple 5 star reviews.

In the corporate world he has worked with a wide variety from banking to sport, pharmaceutical to insurance. Using his amazing quick wit and intelligence to entertain diverse audiences.

“Delamere is a banter bomb, primed to make you explode with laughter… simply put, he is a master” The Scotsman

To book Neil Delamere for your event or to talk to us about your event requirements, please submit the enquiry form or call us on 087 718 1360.