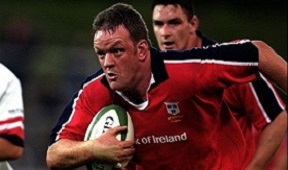 Mick successfully draws on his own experiences in delivering his after-dinner speech at corporate, charity, sports and other events. His down to earth style and ability to motivate and entertain is popular amongst junior rugby teams, senior business managers and politicians alike.  Mick Galwey is a natural entertainer with hilarious anecdotes about his sporting life and is a popular after-dinner speaker and much loved by all audiences.

Under Mick Galway, Munster became a powerhouse of European rugby, reaching two finals although they missed out on the Heineken Cup on both occasions. An outstanding Gaelic footballer in his youth, Galway tasted early success in that sport, winning an All-Ireland medal with Kerry at Croke Park as a 19-year-old. First capped by Ireland during the 1991 Five Nations Championship, he played for Ireland 41 times, scoring three tries, the most famous of which secured victory for Ireland over England at Lansdowne Road in 1993. He also went on to represent the British and Irish Lions in New Zealand that summer. He played his last game for Ireland in 2002 against Scotland.

To book Mick Galwey or to talk to us about your event requirements, please submit the enquiry form or call us on 01 235 2570.