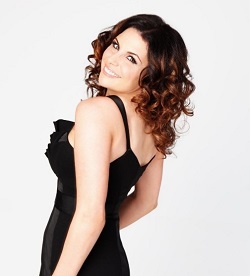 Lisa Cannon is a popular presenter and a constant fixture on Irish television screens for over fifteen years. Irish viewers watched her most recently on TV3’s Box Office and Xpose.

Prior to television, she presented on Irish radio for five years. She was co-host on Q102’s The Big Saturday Show and was a regular segment contributor on FM104’s Breakfast Show as Colm and Jim Jim’s roving interviewer and reporter.

Over the years, she has presented on RTE’s prime time show Nationwide, City Channel’s Better Health and On The Box. She also presented on The Early Show, a CBS television program broadcast to over 3 million US viewers, demonstrating her diversity and experience in interviewing styles on both radio and television.

For ten years, viewers tuned into TV3’s daily entertainment show Xpose to watch Lisa co-anchor the show, interview the world’s leading celebrities and report from red carpets across the globe. Lisa proved a popular co-anchor on TV3’s live weekend breakfast shows, Saturday AM and Sunday AM, while covering maternity leave for Anna Daly.

A popular celebrity with a strong online presence, Lisa works with various brands on collaborations and ambassadorships. In 2017, she was invited to become Ireland’s first Weight Watchers Ambassador. VHI and Meadows & Byrne are just a couple of brands she has collaborated with, leveraging her online influence across her social media platforms.

To book Lisa Cannon to host or MC your corporate event or to talk to us about your event requirements, either submit the enquiry form, email us: info@carolandassociates.com or call us on 01 235 2570.