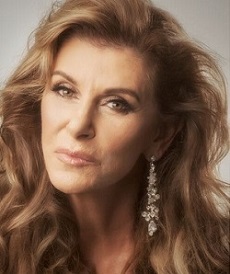 Singer, TV Presenter, Actress, Eurovision song contest winner and nationwide TV personality, Linda Martin is best known in Europe as the winner of the Eurovision Song Contest in 1992 with the song “Why Me?”, and in Ireland as a member of the 1970s/1980s band, Chips.

Linda Martin started off her musical career when she joined the band Chips in Omagh in 1969. They quickly became one of the top bands in Ireland on the live circuit and released hit singles “Love Matters”, “Twice a Week” and “Goodbye Goodbye” during the mid to late 1970s. In 1972, Martin broke away from Chips to be a vocalist with new band Lyttle People, but rejoined Chips the following year. The group appeared on Opportunity Knocks in 1974 and appeared a number of times on British television promoting their singles, but never scored a UK hit. With multiple entries to the Irish National finals of the Eurovision Song Contest, the band carried on into the 1980s. They scored a final Irish hit in 1982 with “David’s Song”, after which Martin broke away when she won the Castlebar Song Contest with “Edge of the Universe” in 1983. From this point she concentrated on a solo career as well as occasional live appearances with Chips until they recruited a new lead singer (Valerie Roe) in the late 1980s.

Linda participated in the National Song Contest four times as a member of Chips, however they did not score successfully. She participated another four times in the contest as a soloist and once more as part of the group “Linda Martin and Friends”. With nine participations, she has been the most frequent entrant in the National Song Contest’s history. She won the contest twice, going on to represent Ireland twice at the Eurovision Song Contest. The first of these victories was in 1984 with the song “Terminal 3”, written by Johnny Logan (under his real name Séan Sherrard). The song came 2nd in the final, being beaten by 8 points. “Terminal 3” reached No.7 in the Irish charts. The second victory was in 1992 when her song “Why Me” (also written by Logan) went on to win the final in Sweden. This became Ireland’s 4th victory in the Eurovision Song Contest and the song reached No.1 in the Irish charts as well as becoming a hit in many European countries.

Martin was, at the time, one of only three artists to finish both first and second at Eurovision, behind Lys Assia and Gigliola Cinquetti. Since then, only Elisabeth Andreassen and Dima Bilan have achieved this, raising the number to 5.

Linda has presented the RTÉ quiz show The Lyrics Board, one of the broadcaster’s more popular formats. She served as one of Louis Walsh’s behind-the-scenes team on the first series of ITV’s The X Factor.

She also served as a judge on the first, second and fourth seasons of RTÉ’s You’re a Star and on Charity You’re a Star in Summer 2005 and Summer 2006. Linda has not ruled out a return to Eurovision following Ireland’s dismal performance in the 2007 contest finishing last with only five points.

Linda was a guest performer at Congratulations, the 50th anniversary Eurovision concert in Copenhagen, Denmark, in October 2005. She was also the Irish spokesperson for Eurovision Song Contest 2007 and was one of the five judges for Eurosong 2009 (Irish Selection for Eurovision). In 2012, she was the mentor for Jedward in the Irish Eurovision final Eurosong 2012.

During the interval of Eurovision 2013 the host Petra Mede presented a light hearted history of the contest, during which she explained to viewers that Johnny Logan had won the competition three times, in 1980, 1987 and 1992. Appearing alongside Linda Martin in some vintage footage she joked that he had won the third time disguised as a woman, saying, “I recognise a drag queen when I see one”.

Linda has also appeared in pantomime, in Dublin. She starred in Cinderella as the Wicked Stepmother, Snow White as the Evil Queen and Robin Hood as herself, at the Olympia Theatre.

To book Linda Martin for your event or to talk to us about your corporate event requirements, either submit the enquiry form, email us:  info@carolandassociates.com or call us on 01 235 2570.