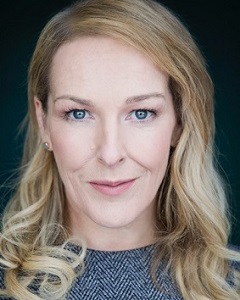 Straight off the dance-floor after a very successful journey on Dancing with the stars where she reached week ten, Katherine Lynch is available for after dinner speeches, to host events, join panels on a vary of issues or simply to entertain!
Television personality and comedian Katherine is known for her multiplicity of characters.

She made the leap to TV when she was spotted as traveller character ‘Singing Bernie Walsh’ on RTE’s comedy programme The Unbelievable Truth”.

Since then Katherine has brought us the three-part comedy show “WORKING GIRLS” and the six-part series (and Christmas Special) “Wonder Women” and the 18-part series “Wagons Den for RTE Television which introduced viewers to her new larger than life personae: working class goddess ‘Sheila Chic’ and Irish country, sports-loving lesbian ‘Liz Hurley’.

This was followed by “Katherine Lynch’s Single Ladies” and a nationwide sell-out tour, which included 16 nights in Dublin’s Vicar Street.

Katherine just played the iconic role of Miss Hannigan in Annie at the national concert hall and continues to make music, play parts and entertain audiences across the country.

To book Katherine Lynch for your event or to talk to us about your corporate event requirements, either submit the enquiry form, email us:  info@carolandassociates.com or call us on 01 235 2570.