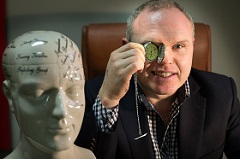 For over ten years he was one of Ireland’s best known journalists for The Sunday Independent as well as the producer and star of the hit show The Irish Rat Pack, which performed at over 1,000 events including 7 sold out night in Vicar Street.

He has also written two bestselling self help books and was named on the 2012 Trinity College Roll of Honor for his research into the of clinical Hypnotherapy for cancer patients.

In 2012 he founded The D4 Clinic in Blackrock which had featured on both national and international media as the leading clinical hypnotherapy experts Ireland.

Jason is suitable for corporate events (motivational speaking, team building, communication days,MC duties) or entertainment events where he can perform stage hypnosis to lighten the mood after his psychological seminars.

To book Jason O’Callaghan or to talk to us about your event requirements, please submit the enquiry form or call us on 01 235 2570.