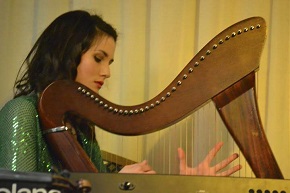 Áine Ní Dhubhghaill was immersed in Irish traditional music from an early age. She has had numerous performances at harp festivals and concerts around the world including the US, Hungary, the Netherlands, Brittany, Wales, Scotland, England, Germany and Vietnam.  Áine has played with orchestras and ensembles including the RTÉCO and the RTÉNSO.

Emer Toale is a harpist and pianist from Glasnevin, Dublin.  Having played both instruments for over ten years, Emer has performed extensively at events ranging from small weddings to corporate and state functions, as well as joining some of Ireland’s best young traditional musicians on the Comhaltas Ceoltóirí Éireann tours of Ireland, Britain and the United States of America.  Emer has won numerous awards for her musicianship, including prizes at Fleadh Cheoil na hÉireann, and the Royal Irish Academy of Music’s High Achiever Award.