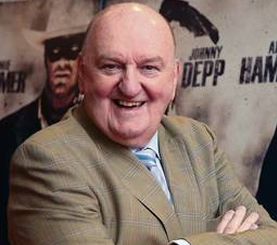 In less than a decade George has become one of the biggest names in Irish media. His meteoric rise at a time of life when he himself suggests, that “he should be consulting an undertaker” has rarely been equalled in broadcasting history in Ireland.

A former presenter of the popular Newstalk show ‘The Right Hook’,  George now delivers his one of a kind daily dose of no-holds-barred comment and opinion every weekday from 12pm-2pm on Newstalk’s ‘High Noon’.

George had a career as a rugby union coach and businessman, before becoming a rugby pundit with RTÉ. He has also made many TV appearances, such as judging on Jigs & Reels and coaching on Celebrity Bainisteoir.

In 1997 he became a fixture on RTE’s television rugby panel with Tom McGurk and Brent Pope and quickly established himself as a fearless but knowledgeable critic of the game. His humour, addiction to historical references and command of language propelled the rugby analysis to the realm of cult status. Major rugby occasions now see RTE outscore their competitors, BBC and ITV, by 5:1

For the Sunday Independent George performs a similar role in print journalism to that of television and straddles the two mediums with ease. His columns are all his own work and his autobiography launched Christmas 2005.

He was a 3-time winner of the British Chambers of Commerce, best individual speaker award, and is one of the elite few that “can fill a hall”. His appearance at a recent Dublin Chamber of Commerce breakfast brought the highest attendance in the history of the event.

George has had a number of jobs, beginning as a temporary clerk for CIÉ, and later becoming a travelling salesman for the Burroughs Corporation (now Unisys). He also ran a catering business for over twenty years. He coached London Irish, Connacht, and St. Benildus College, as well as the American National Team in the 1987 Rugby World Cup.

In 2005, George published an autobiography, “Time Added On”. The book described his years involved in business and the failure of this career path.  In 2013, George released his second book, “This is Rugby” lauded as a unique look at the great game, from one of Ireland’s best-known rugby commentators.

George Hook is Chairman of The Lords Taverners Ireland, a charity for disabled young people and those with special needs.  He is also an Ambassador for ‘Haven’ an Irish NGO working to build sustainable communities in Haiti.

To book George Hook or to talk to us about your event requirements, please submit the enquiry form or call us on 01 235 2570.