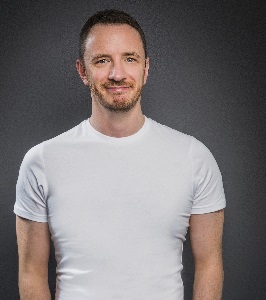 Gearóid is a polished live performer with numerous television and radio credits to his name. In 2012 he made his solo debut at the Edinburgh Festival with his show “Turbulence” winning a five star review in the process. He was subsequently invited to support comedy royalty and living legend Joan Rivers for the Dublin dates of her “Now or Never” tour, following these dates Joan Rivers once again asked him to open for her at one of the largest venues on her UK tour, which was filmed for her reality show.

He has had three solo tours and also been tour support for Sarah Millican, Patton Oswalt  and Joanne McNally in large venues and theatres. In 2018 he appeared at the 3 Arena in Dublin in front of 15,000 people as part of a star-studded show for Comic Relief.

Gearóid was one of the first Irish comedians to begin podcasting. He is the host of the popular podcast “Fascinated” where he chats to people he was a big fan of as a teenager. He has interviewed Grammy Winners, Emmy Winners, Oscar Nominees, Eurovision Winners, Tony Winners, Politicians and Olympians. Last summer he interviewed his favourite actress; “Cagney and Lacey” star Tyne Daly live on stage at the Galway Film Fleadh.

During the pandemic he devised The BakeAlong.com  an interactive online comedy show which ran weekly for a year with numerous celebrity guest judges. The show evolved into a successful online corporate event used post pandemic for multinational events. The Bake Along had client such as: Aviva, E.S.B., Workhuman, Dun & Bradstreet and the National Treasury Management Agency.

‘Gearoid was so funny and on point, the girls loved him’ Trim Ladies Lunch 2022

To book Gearóid Farrelly or to talk to us about your event requirements, please submit our enquiry form or call  01 235 2570.