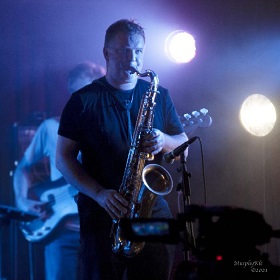 Derek O’Connor or ‘Doc’ as he’s better known is Ireland’s number one first call session saxophonist to all the stars.

Derek’s ability to blend into any musical surrounding coupled with his talents as a multi-instrumentalist has led to him being regularly chosen to perform with many well-known artists. Derek has toured, performed and recorded around the world with Wet Wet Wet, Bob Geldof and The Boomtown Rats, The Commitments, Paul Brady, Van Morrison, Chaka Khan, Imelda May, Heartbeat of Home, and Jeffrey Osborne to name but a few. He has worked with many of Ireland’s top country, pop and rock stars over the years. He was house saxophonist on Tubridy Tonight and The Late Late Show for the past 16 years as a member of The Camembert Quartet.

His current DJ and Sax show is receiving huge praise on the international scene and the local corporate scene, which has recently seen him play in South of France, Spain and Italy.