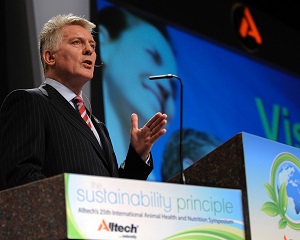 Declan is one of Ireland’s most internationally experienced Leadership Training & Development consultants. He is also much sought after for Executive Coaching and as a Conference Keynote speaker. He has delivered specialist programmes on leadership, management, sales and organisational development to clients in Ireland, the UK, Holland, Germany, France, Hungary, Ukraine, USA, Hong Kong, Thailand, The Philippines, Korea, Vietnam, China and Australia. Married to Annette Kinne from Australia, he has three children, Genevieve, Fionn and Alexander.

His unique use of tools such as NLP to focus Leadership Teams on personal and company goals to maintain consistently high levels of motivation and success is underpinned by harnessing the unique power of individual personality styles using the Enneagram Model. He combines this with the Red & Green Platform System he developed that has revolutionised leadership and coaching thinking and performance in companies where he has worked.

His success as a key motivator and executive coach for Business Leaders has in recent years been harnessed in the sports arena where he has given regular goal setting and mental strength motivational sessions to a number of GAA teams including the Cavan, Kerry, Cork (Football) Tipperary (Hurling), Down, Offaly (Football), Dublin (Hurling), and Wicklow teams. He worked closely with Kilmacud Crokes when they won the 2008 All-Ireland Club Championship. Declan is himself a former Ulster Championship medal winner who played senior football with Cavan. He also worked with the Kentucky Wildcats when they won the National Basketball Title in the U.S.

He is fluent in a number of languages including Mandarin and has a Masters degree in theology and an STL and from his post-graduate work at Ottawa University and St Paul University in Canada.

Declan has written and produced many articles and DVDs on leadership, management, sales strategies, communications, teamwork and change management.

He is the author of the Number 1 Best Selling book, The Green Platform, an innovative “inner software” methodology that has transformed the morale, productivity and profitability of companies across the globe. He also wrote 116 weekly hugely popular motivational columns for Fit Magazine that is published with the Irish Independent, Ireland’s largest selling daily newspaper. He has rewritten 90 of those inspirational columns for his new book called Living The Green Platform – Life Changing Stories coming out in April, 2016.

He has been a guest on many television shows and radio programmes including The Late Late Show, The Saturday Night Show (twice), Ireland AM, The Joe B. & Denny Show, Radio Vermont and One To One With Bill Goodman in the U.S.

Declan is a member of the Irish Institute of Training and Development. He is also a Master Practitioner in NLP and a certified Enneagram teacher.

To book Declan Coyle or to talk to us about your event requirements, please submit the enquiry form or call us on 01 235 2570.