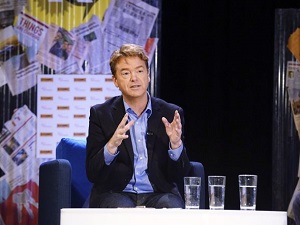 David McWilliams is an economist, author, journalist, documentary-maker and broadcaster. He is Adjunct Professor of Global Economics at the School of Business Trinity College Dublin. David is ranked 10th most influential economist in the world.

As a result, he co-founded the world’s only economics and stand-up comedy festival Kilkenomics – described by the FT as “simply, the best economics conference in the world”. He also founded Ireland’s leading literary and ideas shindig, the Dalkey Book Festival. The WEF at Davos debased their currency profoundly by making him a Young Global Leader a few years back.

As well as writing a weekly economics column in the Irish Times, he is active on social media and was named Ireland’s “most influential Twitter user” in 2016. David uses new ways to explain our economic world for example Punk Economics and a new venture with the FT, Punk FT, deploy cartoons to make economics digestible for normal, non-nerdy, punters.

He has written four bestsellers, presented award-winning documentaries and has even brought economics to the stage, at Ireland’s Abbey Theatre.

He is very active on social media and the third most widely followed economist in the world with 159,000 Twitter followers. David is also ranked “Ireland’s most influential Twitter user”. He writes two economics columns a week and is a regular international contributor to the Financial Times. His daily global financial markets newsletter, GlobalMacro360.com is read by tens of thousands of his Twitter followers each morning all around the globe.

He is the co-founder of the world’s only economics festival ‘Kilkenomics’, an eclectic combination of economics and stand-up comedy, described by The Australian as “Davos without the hookers”.

David has just launched his new online economics course – “Economics without Boundaries” – partnering with Udemy and his series of animated economics videos – Punk Economics – have been viewed by 700,000 people so far.

Once upon a time he had a real job working as an economist first in the Irish Central Bank and later as Chief European Economist at UBS and Head of Emerging Markets Research at Banque Nationale de Paris. He studied economics at Trinity College Dublin and the College of Europe in Bruges.

To book David McWilliams or to talk to us about your corporate event requirements, either submit the enquiry form, email us:  info@carolandassociates.com or call us on 01 235 2570.