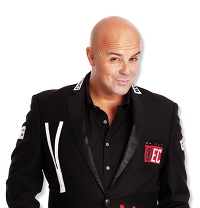 Regarded as one of the funniest comedians of his generation, Dave Young has been described as hilarious and thrilling to watch. His sell out shows are a huge hit containing a blend of storytelling, parodies, characters and sound effects that bring his own personal experiences to life. Dave’s unique comedy style is resonated through his live DVD’s, making him popular with people of all ages. The secret to his success is in his very positive and humorous outlook on life. As he says himself “Laughter is the best medicine… unless you’re laughing for no reason… then you just might need medicine”.

Dave’s numerous television appearances and credits include: The Late Late Show, The Saturday Night Show, The Miriam Show, The Morning Show, Celebrity ICA Boot camp, The Voice of Ireland and more. He is currently on tour with his all new show “Laugh Out Loud”. Which takes you on a wild journey of dis-organised mayhem? Catch Dave at his funniest and always controversial best, but WARNING, YOU MAY DIE LAUGHING!

To book Dave Young for your corporate event or to talk to us about your event requirements, either submit the enquiry form, email us: info@carolandassociates.com or call us on 01 235 2570.