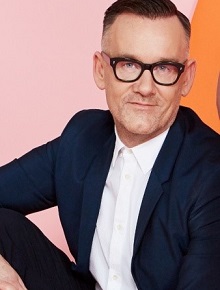 One of Ireland’s best known and well-loved TV presenters, broadcasters and designers, Brendan Courtney is a highly engaging MC and an inspirational speaker. Brendan has hosted countless TV series in Ireland and the UK including his own terrestrial TV talk show. Brendan also runs his own successful women’s wear fashion label ‘Lennon Courtney’ with his business partner Sonya Lennon.

After a very successful career as a TV format creator, he spearheaded the return of the BBC’s “The Clothes Show” which he produced and presented for 3 seasons. He has hosted The Clothes Show Live for the past 10 years. As creative director of Giant Film & TV he produced and presented countless TV series. He has co-written two No.1 books on style and fashion with Sonya Lennon – (LOVE YOUR LOOK and YOUR BEST YOU)

His self authored documentaries ‘Alias Ricky Gervais’ and ‘Living with Boy George’ won him critical acclaim. He then went on to host a self titled terrestrial TV chat show “The Brendan Courtney Show” which led to his role as presenter and stylist on RTE1’s fashion flag ship TV Show “OFF THE RAILS” for 7 seasons.

In 2013 Brendan created the international design competition “Who Wants to be a Milliner”, along side Philip Treacy and Stephen Jones. The competition celebrated and promoted Irish design and export. In the same year Brendan and his business partner Sonya Lennon launched their women’s wear label “Lennon Courtney” which has now been licensed by Dunnes Stores.

The combination of their lifestyle, design and broadcast experience has culminated in the creation of ‘frockadvisor’ – Sonya and Brendan’s unique fashion tech solution and publisher – now employing 24 people they have closed their 2nd round of investment and are competing on the international fashion tech stage.

From the Oscars red carpet, to the BBC Arts Awards Brendan is a very experienced and entertaining LIVE host and MC and regularly speaks at events across the country.

To book Brendan Courtney to MC your event or to talk to us about your event requirements, please submit the enquiry form or call us on 01 235 2570.