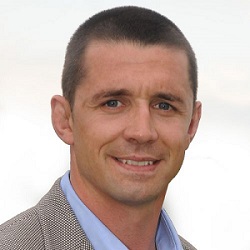 Alan Quinlan is one of sport’s most engaging, intelligent and motivating personalities.  Since retiring from an extended playing career for both Munster and Ireland, he has forged a very successful career as a media analyst, MC and Journalist.  In addition, Alan’s work on the Motivational, Leadership and Wellness circuit has seen him quickly develop into a sought after speaker both in Ireland and the UK.

As an ambassador, he partners with Aramark, Ulster Bank/ RBS, Laya Healthcare, eircom and Topaz.  Alan also writes for the Irish Independent and works with RTE, Sky Sports and Newstalk.  He was part of ITV’s Rugby World Coverage in 2011 & 2015.

Alan Quinlan was educated at Abbey CBS in Tipperary and worked for a motor dealer after leaving school. He began his rugby career with Clanwilliam FC where he captained the Irish Youth Team against Scotland in 1993.  Alan moved from Clanwilliam to join Shannon U20s in 1994.

Alan began playing for Munster in 1996 and captained the youths team before becoming a regular in the first team. In May 2006 he made a comeback from a cruciate ligament injury earlier in the season to win both the AIB League Division 1 title with Shannon and the Heineken Cup with Munster after a late appearance from the bench in the Heineken Cup Final win over Biarritz in Cardiff. He captained the side from Number Eight in Munster’s upset victory over Ulster in Ravenhill in the 2007 Magner’s League.  He was voted Man of the Match as Munster beat Toulouse 16–13 on 24 May 2008 to win the Heineken Cup for a second time.  He was part of the Squad that won the 2008 – 2009 Magners League.

In total Alan holds six All Ireland league medals with Shannon, as well as two Heineken Cup medals and two Celtic League Medals with Munster.  Alan won his 201st cap against Leinster, equalling Anthony Foley’s club record for caps, on 2 October 2010. He became Munster’s most capped player ever on 16 October 2010, against RC Toulon in the Heineken Cup.

Alan represented Ireland ‘A’ between 1998 and 2001 and made his senior debut for the Irish national team in October 1999 as a replacement in a Test against Romania.  He played his first Six Nations match against Italy in 2001.  He was a part of Ireland’s squad at the 2003 Rugby World Cup in Australia and scored two tries in the tournament before dislocating his shoulder scoring a vital try against Argentina in the pool stages, which ended his involvement.   He took his caps to a total of 27 by playing in the Autumn Internationals of 2008 against Canada and the All Blacks.

Alan is an excellent communicator and is proving very popular as an event speaker. He is available as a guest speaker, MC, after-dinner speaker or awards host and can speak on such topics as: Leadership & Teamwork, Motivation and Mental Health.

“Alan, I  just want to say thanks again for a fantastic talk on Thursday. We have had such a phenomenal response.  People seem to have really connected with everything you said.  Keep up the fantastic work you are doing as it is making a real impact on people’s lives!” BNY Mellon Corporate Trust

To book Alan Quinlan to speak at your corporate event or to talk to us about your event requirements, either submit the enquiry form, email us:  info@carolandassociates.com or call us on 01 235 2570.