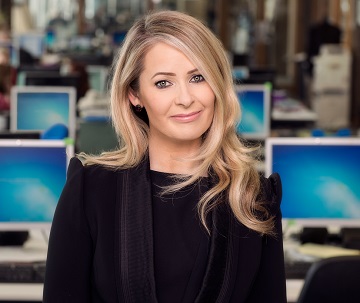 Broadcaster and Journalist Sharon Ní Bheoláin is a much sought after event host and conference facilitator.

Sharon is best known as co-anchor of RTE’s flag-ship programme Six One News and presenter of RTEs Leaders’ Questions on RTE1 and News Now and is a regular host and MC at awards events and ceremonies throughout the year.

Sharon began her career in RTE with Nuacht.

Before joining Six One, Sharon reported and presented across all of RTEs main television bulletins and was the recipient of a Law Society of Ireland Justice Media Award for a feature broadcast on RTE’s PrimeTime and worked for the Dublin radio station, ‘Raidió na Life’.

Throughout the early 2000’s, she had sporadic appearances on various RTÉ News shows including the Six-One News, the Nine O’Clock programme and on RTÉ Two’s News programmes. In 2005, she became permanent co-presenter of the Six One News.

Sharon Ní Bheoláin is a great choice for your event, conference or awards ceremony.

Sharon is also a passionate advocate of animal welfare and an Ambassador for N.G.O ActionAid promoting education rights for girls in developing countries.

To book Sharon Ní Bheoláin to MC or Chair your event, or to talk to us about your corporate event requirements, either submit the enquiry form, email us:  info@carolandassociates.com or call us on 01 235 2570.