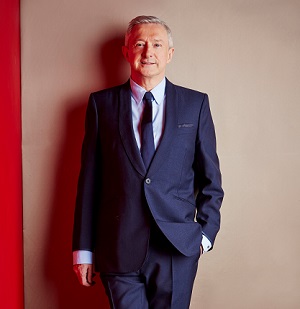 Louis Walsh, pop mogul and charismatic judge on The X Factor is behind some of the most successful bands in pop history including  Boyzone, Westlife, Samantha Mumba, Girls Aloud, Shayne Ward, Wonderland and of course Jedward. The fact that he has achieved 28 number one hits is a testament to his success and is one of the reasons why Louis is one of the most respected names in the music industry today.

Originally from Kiltimagh, County Mayo, Louis moved to Dublin to get a start in the music industry and went on to manage Johnny Logan, Boyzone and Westlife, three of Ireland’s most successful pop artists of all time.

Louis has been a judge on The X Factor since the show’s inception in 2004 and was the winning judge of the show’s second series, mentoring Shayne Ward.  He has also appeared on You’re a Star, Britain’s Got Talent and The X Factor USA.

With his sense of fun and mischief and reputation around the globe for a magic touch when it comes to managing pop acts, Louis Walsh is a popular awards host, after dinner speaker or judge for corporate events and is available for bookings today.

To book Louis Walsh for your event or to talk to us about your event requirements, either submit the enquiry form, email us: info@carolandassociates.com or call us on 01 235 2570.