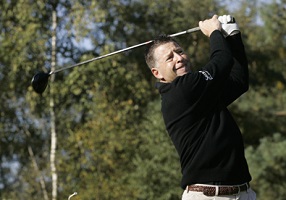 John McHenry is a professional golfer who spent 12 years on the European Tour from 1987 to 2000 winning three Challenge Tour titles during that time. He also holds three Irish youth titles and four amateur European titles.

When the chance to become Director of the K Club presented itself, McHenry recognised it as another challenging opportunity, especially with the 2006 Ryder Cup, which under McHenry, proved to be an unequivocal success.

After the K Club McHenry moved down the road where he was retained to set up and run a luxurious golf facility at Moyvalley, County Kildare, which opened in 2008.

Hailing from the Douglas Golf Club John claimed Irish Youths titles in 1980, 1981, and 1985, and in 1986 became the Irish Close champion, winning at Royal Dublin by 4 and 3 against Paul Rayfus of Trim (now County Meath GC). Rayfus had won the West of Ireland title that year, but had no answer to McHenry in the Irish Close final.

McHenry added the South of Ireland title at Lahinch in 1986 which helped in no small way to his selection for the Walker Cup team in 1987 and on the road to what looked like a promising professional career.

Between his first season in 1988 and 1999, McHenry won €262,926 in prize money with his highest Tour being 81st in 1993. A spectacular performance ensured a third place finish in the 1998 Irish Open at Druids Glen and a cheque that secured a Tour card for another season.

Since losing his card McHenry has mixed golf consultancy with a media career at RTE Sport been where he covers the Irish Open. In 2009 he joined the mobile phone company 3 as a consultant to the Irish Open bringing the event to Baltray that same year and then Killarney in 2010.

John currently runs McHenry Golf Limited (MGL) which specialises in the provision of a diversified range of specialised golf services to start-up as well as to existing golf resorts.

To book John McHenry for your event or to talk to us about your event requirements, either submit the enquiry form, email us: info@carolandassociates.com or call us on 01 235 2570.